Hit enter to search or ESC to close
News

From Chyrsalis To Butterfly – The Evolution Of The Holiday Park

Holiday caravan parks have come a very long way from their humble beginnings in the 1930s. Initially comprising a few non-travelling touring caravans which were dotted around a field, today most leisure parks offer plush, modern accommodation with extensive on-site facilities and entertainment.  Briefly in danger of once being considered unfashionable with British holidaymakers, now, owing to an increased popularity in both ‘staycations’ and an awareness of cost and environmental options, holiday parks are enjoying a new lease of life.  Similar to that of a chrysalis to a butterfly, we think the evolution of holiday parks throughout the decades has been most spectacular.

When car-pulled caravanning started in the 1920s, there were no official sites; holidaymakers typically just pitched up by the side of a road or in an obliging farmer’s field. This started to change in the 1930s, when small caravan sites started to appear, enabling people to either bring their touring caravans for short stays, or alternatively spend longer periods in larger tourers – known as statics – provided by the site owner. These early sites were extremely basic with very few facilities, but the beginning of a new-found love of caravanning and camping was forming.

Petrol shortages during the Second World War meant that people left their tourers at particular locations and, once the war ended, many of these sites became permanent ventures. However, a lack of general standards, planning and scrutiny resulted in caravanning earning itself something of a bad reputation.  Legislation was then introduced requiring sites to improve the minimum facilities that they offered by, for example, providing proper road surfaces and, even more useful, toilet facilities.

It was at this time that newly manufactured caravans were longer and wider than the time-honoured tourers. The age of the truly static caravan was born!  Consequently, sites started to provide plumbed in water to these larger caravans and, as comfort and convenience levels increased, so did the public’s desire to spend their holidays in static caravans. 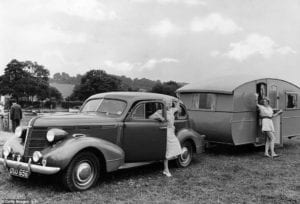 Caravan sites were quick to capitalise on this and developed into fully-fledged holiday parks by providing cafés, shops and entertainment activities. Most popular of all were those located on the coast, as people enjoyed being able to spend their holidays within a stone’s throw of the beach, whilst being free from restrictions imposed by hotels or bed and breakfast establishments.  Although space and some home comforts were at a premium in caravans, this was easily outweighed by the freedom and community spirit of sharing a site and common interests with newly found neighbours.

The growth of holiday parks, in every sense of the word, continued throughout the 50s, 60s and 70s. Facilities continued to be expanded with, for example, improved sewerage being provided and a gradual switch from gas to electricity. Toilets and showers were increasingly being incorporated into new caravans as standard.

Design and layout of holiday parks was also given greater consideration, with landscaping and tree planting performed to enhance the overall appearance. Holiday parks had become big business.

In recent decades, caravan park sizes have continued to grow, to such an extent that many now offer chalets or lodges to holidaymakers, Others are fully residential sites, perhaps with restrictions on owners being able to reside there all year round, but welcoming children and pets.

On-site entertainment has also kept pace with the times, with bigger parks offering facilities such as leisure centres, sports halls and indoor spas. Various activities are also organised for residents to attract customers.  Wi-fi and park-specific apps are also now commonplace.  Holiday parks and residential sites have emerged as a viable alternative to guest house options or traditionally built static second homes, and are regarded as affordable and desirable destinations for holidaymakers and travellers. 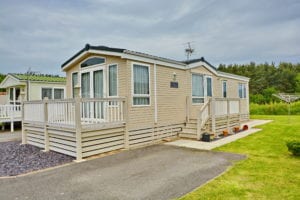 Hill Brothers’ personal journey through the holiday park life story is now in its third generation. We have an extensive range of holiday homes and residential parks in the UK’s most scenic coastal and countryside locations, catering for all age groups, and interests.

Why not take a wander through our individual site pages?  You’ll be amazed at just how far the holiday home and residential park sector has evolved!  Our staff are always delighted to discuss options and arrange site visits, so if you do have any further questions or require information and advice, please do feel free to contact us.